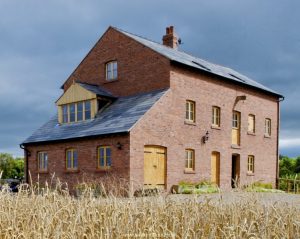 Walk Mill is now a new building, however there has been a water mill on this site for centuries: Walk Mill has been built on the site of the original mill, which dates back to 1200.

It is possible that the River Gowy was navigable at one time. A moated area near to the Mill is listed as a scheduled monument. This was the site of a 12th century wooden fort.

Walk Mill was originally a fuller’s mill not a corn mill and it derives its name from the Roman process of cleaning cloth (fulling), which was done by “walkers.” You can read more information on this in this fasinating article. (PDF)

In the 1990’s some silver Viking coins were found close to the Mill, this find trebled the number of similar coins found in Britain – and the majority of coins similar to these were found in Ireland. The coins found near Walk Mill are now in a Chester museum. 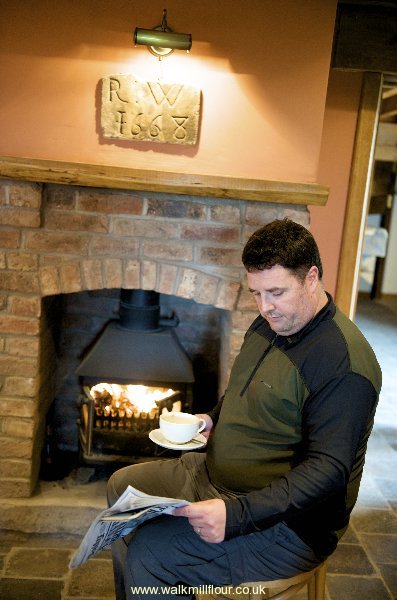 April 21st 1692 was the date of a pre-nuptial settlement between John Bruen of Stapleford and Honor Winnington, daughter of Sir Francis Winnington, which included Walk Mill in Foulk Stapleford with lands and tenements.

In 1802 Walk Mill was leased by Randle Wilbraham to John Dutton, farmer and Thomas Howell, miller for a rent of 15 guineas. Land included in the tenancy was 1 acre, 2 roods, 11 poles of arable land – on condition that within three years they erected a new water corn mill.

The tiles in the current mill (in the Miller’s Kitchen and mill area) are the ones which formed the floor of the original mill.

When these were lifted, prior to the start of building the new mill, some hand-made bricks were found underneath. These bricks can now be seen surrounding the fireplace.

A date stone, engraved “RW 1668” was also found. This now sits above the fireplace in the Millers Kitchen.

The sack hoist outside the building and the damsel are also from the original mill.

Ever wondered how a flour mill works? Well come down to Walk Mill, set in the Cheshire countryside and find out! As well as enjoying a guided tour of the mill equipment in action, why not stop awhile and have a wonderful lunch or afternoon tea, tasting our delicious home-baked bread and cakes? In … END_OF_DOCUMENT_TOKEN_TO_BE_REPLACED

*For Sat Nav use postcode CH3 7RZ to get to the junction of Guy Lane and Walk Mill Lane, then follow Walk Mill Lane down to the river Gowy

Opening hours:
10am-4pm Tuesday to Friday
10am-5pm Saturday and Sunday
We are closed Mondays (except on bank holidays when it’s 10am-4pm).